Even though the actual match in itself was not very important, this game still served as a way for the Colombian national side to warm themselves up for their upcoming 2018 FIFA World Cup Qualification matches where they have to play against Ecuador on March 28 of 2017. END_OF_DOCUMENT_TOKEN_TO_BE_REPLACED 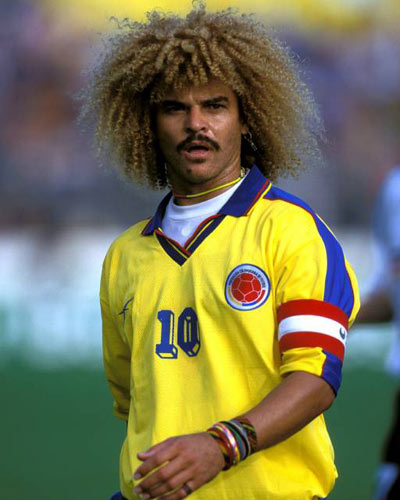 However, Rodriguez’ development at Real Madrid appears to have come to a halt in the last few months. The forward has been unable to make any impact in the team despite being in good form for the national team. Rodriguez has not been getting much game time under Zinedine Zidane. He is expected to be on the bench for the upcoming game against Barcelona. Valderrama is disappointed that Madrid are not giving him a fair chance. Under the regime of Carlo Ancelotti, Rodriguez contributed an astonishing 35 goals in just 46 games. Yet, he does not seem to find confidence in the new manager. END_OF_DOCUMENT_TOKEN_TO_BE_REPLACED

Inter Milan has enjoyed a superb start of the season after having collected a total of 36 points from the opening 17 matches of the season, they are currently at the top of the Italian League and the head coach of the Italian squad, Roberto Mancini has even been receiving offers from other clubs that want him to make a move away from Inter Milan and take charge of another team.

Even with this impressive start that Inter Milan has been going through, Roberto Mancini still doesn’t consider his team to be the favorites of being claimed as the next champions of Italy, and taking into consideration just how competitive and combative this season has turned out to be, it’s a wise decision for Mancini to make.

Mancini wants to remain realistic as anything can happen. Inter Milan has 36 points but they are being followed closely behind by Fiorentina who have 35 points and Napoli also has 35 points. The 4th spot is being filled filled by Juventus which is still in the race for the Italian title with 33 points and at least in this point in time, there isn’t a club that can truly be considered to be as favorites. END_OF_DOCUMENT_TOKEN_TO_BE_REPLACED

Carlos Valderrama says that James Rodriguez can be compared with Messi

Colombian legend Carlos Valderrama says that one of Real Madrid’s biggest signings, James Rodriguez, can be compared along with Lionel Messi and Neymar as amongst the best players in the world.

After a spectacular World Cup 2014, Rodriguez sealed a mega transfer to Real Madrid. He has become one of the most expensive players after having cost a reported £ 73 million. Unlike some of the big-money signings made by Madrid, Rodriguez has certainly proven to be a success despite not winning any major end of season honour in his first season at the club.

After having helped Colombia almost spring a surprise in the World Cup 2014, Rodriguez will be looking to do the same in the upcoming Copa America. Colombia head into the tournament as one of the underdogs. Argentina and Brazil are seen as the favourites, but the presence of Rodriguez is leadingValderrama to believe that Colombia will have a surprise or two in their bags. Still just 22 years of age, Rodriguez is expected to be the future of Colombian football. Strikers like Radamel Falcao have been on the wane in recent years and Rodriguez can take their position in the first-team according toValderrama. END_OF_DOCUMENT_TOKEN_TO_BE_REPLACED

In the previous edition of the World Cup, there was a high amount of squads that were prohibited from having sexual intercourse including: Mexico, Russia, Chile and Bosnia and Herzegovina. The players from the nations of Brazil and England on the other hand were allowed to do it.

Carlos Valderrama is a retired footballer who made over 100 appearances at the international stage for Colombia and represented his national side in 3 World Cups. Valderrama believes that allowing the players of the squad to have sex is something that benefits the entire team.

“If we had sex, sex at the World Cup, we would have been better. We would have relaxed after games, especially after losses. That’s total relaxation. Of course it’s better to have sex during the World Cup.”Valderrama said as he voiced his opinion concerning having sexual relations during the international competition.

Joechim Low allowed his German squad to engage in sexual intercourse and they were the nation that came out on top with the victory as Germany was crowned as the best team in the world after defeating Argentina in the finals.

The Spanish side was given permission to have sex during the 2014 World Cup and it seems like it was a bad decision as the team of Vicente del Bosque was one of the first nations to lose and be disqualified after only being able to win one match in the group stages but was defeated when facing off with Netherlands and Chile. END_OF_DOCUMENT_TOKEN_TO_BE_REPLACED

Carlos Valderrama spent 22 years playing football with a number of different clubs around the world including: Deportivo Cali, Montpellier, Tampa Bay Mutiny and Colorado Rapids just to name a few of them. However, he was especially recognized and famous for all of the contributions he made for Colombia as he wore his country’s jersey in over 100 occasions.

It’s been over 10 years since the Valderrama announced his retirement but he still remains being an important figure in the world of football as the former player has now turned into a coach which is a trend that has been growing recently as more players decide to turn into managers after hanging up their boots.

Valderrama has praised Real Madrid’s James Rodriguez who is currently recovering from an injury he sustained earlier in February.

James Rodriguez was signed by Real Madrid after the Colombian player made a huge impact in the 2014 World Cup as he finished as the top goal-scorer after scoring 5 goals. For a transfer fee of €80 million, Real Madrid snatched him up but the young attacker has received criticism as he has not truly managed to live up to his astronomically high price tag however, Valderrama has been surprised by what the young player has accomplished since arriving to the Santiago Bernabeu. END_OF_DOCUMENT_TOKEN_TO_BE_REPLACED